We were ready before 7. 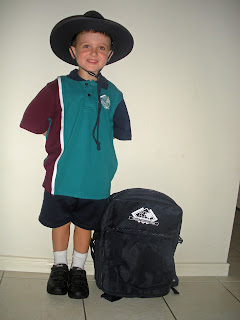 “Can I get dressed now – PLEASE,” Jay kept asking.


He was referring to his uniform. The one that had sat in dark cupboards and drawers for weeks and weeks; waiting, like Jay, for the sun to come up on this milestone day.


We stalled and stalled with breakfast (wolfed down in 60 seconds flat), face-washing (a rinsed but still porridge-sticky hand wiped over nose and mouth) and games (paper planes flying dangerously close to his baby sister).


We even allowed cartoons on TV, while muttering something about “not in my day” and “never again on a school morning”.


This ready-for-first-day-of-school caper was a marathon, not a sprint.


You don’t want to peak too early.


We rushed around getting lunches and bags ready to go, wondering how something we had spent months preparing for had suddenly appeared as such a surprise.


“Does he need sunscreen, what else should I put in his backpack, did you label his shorts, do we need to pack spare jocks, what lunchbox should we use, will they have a fridge there, where is his hat, which water bottle will he take, where will it go, what time is it?”


I believe we managed to get our 11-month-old sorted for daycare, but I honestly cannot remember how that happened.


Our focus was elsewhere. On our beautiful, beautiful boy, who surely was in our arms as a newborn in hospital just yesterday.


We drive to school and see for the first time what thousands of battle-hardened mums and dads are nightmarishly familiar with: the mayhem of drop-off.


And I thought you only saw that many cars in one place, and illegally parked, in Mooloolaba at Christmas.


Jay arrived at his classroom and was swept up in a tide of little bodies weighed down by enormous backpacks and even bigger clothes.


Surely they were playing dress-ups and we would take them home for a cuddle and a Milo in an hour.


Bags are put away, lunchboxes and water bottles sorted.


Parents take a symbolic step back as their kids sit at tables, colouring in quietly.


The teacher announces it’s time for the children to say goodbye to the mums and dads.


That word goodbye hangs in the air, triggering an automatic swelling in my throat as tears well in my eyes.


Some little ones turn their mouths down, capturing the sadness and anxiety of the occasion in perfect kid-caricature.


Hugs and well wishes for a good day are shared, some clinging a little more tightly, for just a bit longer.


We disappear out the door, some clutching tissues to noses, leaving our children to take the first steps on one of life’s most incredible adventures.


Alone. Into the unknown.

DID HE EAT IT ALL?
Yes, except for a few grapes that apparently had brown marks on them.

HOW WAS HIS DAY?
Excellent, non-stop chatter on the way home in the car. Day included: sandpit play, books, rest time with "feely toys", songs and time in the playground. It was bloody hot, probably mid-30s, and humid thanks to the soaked Cyclone Oswald-affected ground steaming in the hot sun. Weirdly enough though, he didn't go to the toilet, even though he knew where they were. Not sure if he sweated out everything he drank, or he was afraid to. We'll see. I took in three chocolate crackles for his teacher as a thank you, Jay proudly delivered them.
And we are off...the school years.
Posted by Bec at 3:39 PM 2 comments:

Bec
Sunshine Coast, Queensland, Australia
I'm a Leo, a journalist and one half of a same-sex relationship...don't you cross me! Haha. We are the proud parents of the world's cutest four-year-old and we now have another baby on the way. We were pregnant in 2010, but sadly had to say goodbye in September (at 16 weeks) because of a positive Downs Syndrome/major heart defect test result. This time, I am pregnant with a girl and she will be the "fourth" of the blog title, as in the fourth member of our little family. This is a document of my experience with IVF using anonymous donor American sperm. My partner had brilliant success before me...and now it's my turn. Eeek! Wish me luck and come, follow me!

I'm a Blog This member
inspiring and connecting with Australian Bloggers.

I need a flogging

Thanks for stopping by